Peaceful Lake Tana and the Islands

Lake Tana itself is peaceful and beautiful and just what we needed.  The three of us sat quietly on the boat simply soaking up the atmosphere and the quiet.  It was wonderful.

There are several islands in the lake with 9th century churches and we stopped at two.  Tourist associations have been set up all over Ethiopia so that local people actually make money through tourism rather than a rich outsider.  What this means is that only registered guides are allowed to operate and these are people from that village who have studied tourism and any entrance fees and tips go into the pot for the benefit for all the village.  I am not sure how this actually works as it seems to be different in each place we visited but you get the general idea.

When we arrived at the first island, we got off the boat and we were met by the official guide who charged us 90 ETB for his services.  The guide was very humble and ingratiating and he was flanked by a line of hopeful young boys.  It was an uphill muddyish walk to the church and naturally a young boy leapt to the rescue to hold our hand and support us on the slippery uphill slope.  We passed by a number of stalls laden with jewelry, baskets and icon.  “Later!” we called and with a sinking feeling we knew we were going to have to pass through this gauntlet on the way down.

The church was absolutely amazing and nothing like I had seen before.  It was a traditional round building with a two concentric design.  The outer ring is for chanting, the inner circle is for people to pray and three entrances (one for the priest, one for men and one for women).  This inner space has a dividing wall which is called the “Holy of Holies” where only priests are allowed.  The roof is made of grass and the outside wall is made of bamboo.

The outside walls are beautifully painted with vivid reds, yellows, blues and greens.  I say the walls are painted but the paintings are made on cotton fabric which is then stuck on the mud walls. 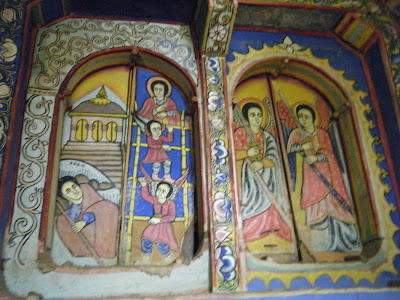 Everything about the design of the church and the artifacts are symbolic of some aspect of either the Old or New Testament.  The three doors represent the trinity; father, son and Holy Spirit.  The drums used for chanting is also full of symbolism representing the tomb where Jesus was buried (it is hollow with a stone inside) and the binding represents the cords that were used to whip Christ.  The guide was very good, explaining all the bible stories that were depicted on the walls, and his face lit up when he talked about God and the church.

We were charged 100 ETB each for entrance to the church.

On the way back, as expected we were met with a barrage of demands to look at their stalls and buy their wares.  The guide “negotiated!” on our behalf confirming that the prices they were demanded were reasonable. We were suckered all round.  My sister (“Soft-touch” is her new nickname) bought a nickel and plastic necklace for 350ETB and I bought a small cross for 150ETB and an icon for 250ETB.  It was like taking candy from a baby! Goo Goo!

We made it back onto the boat with our purses lighter and our hearts heavier with that sinking feeling that we had been ripped off and set off for our second mauling of the day to island number two.  We were ready for this one and we were met with the same routine, but the prices were cheaper.  This guide charged 75ETB and the churches also included a visit to the “museum” where priceless 9th century bibles and prayer books are exposed to the sun and flash cameras.

We had no more money with us and so we appeared to be playing it cool when we refused to buy the goods on sale.  In the end they were offering us better jewelry at less than half the price of what we had paid on the other island.  Goo Goo!

We had a lovely boat ride back to the hotel, a nice lunch and then got ready for our trip to the Blue Niles falls.  The guy on reception had organized this for us and we had arranged for the driver to stop at the bank for us and then at the Ethiopian Airline office so that we could book the next leg of our journey.  We came out of the office and looked for our driver but her was nowhere to be seen!  We waited – had he had to make a call, drive round the block? WE waited but he didn’t show.  In the end we went to the Papyrus Hotel and arranged it from there.  It was getting late and I really, really didn’t want to miss this visit and this was our only chance to get to see it as we were catching a DAY BUS (!) the next day to Gondar.  There was a bit of a wait but the new driver turned up in a minivan and we began our road trip to the Blue Nile Falls.
Posted by Jen2010 at 08:44